The Ohio State Army ROTC Alumni Society is pleased to announce its slate of inductees for the 2017 Hall of Fame Class.

The Ohio State University Class of 1972 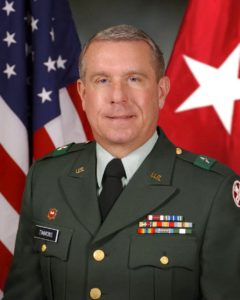 Brig. Gen. (Ret.) Robin Timmons has led large organizations in both a military and civilian career. He is truly a great example of a civilian-soldier; balancing two successful careers, family and outside organizations simultaneously. His outstanding leadership qualities ensured his success in both his military and civilian careers. Brig. Gen. (Ret.) Timmons commanded for 11 continuous years; from the Battalion to Group to Brigade level of commands. The Air Defense Battalion and Engineer Group he commanded were designated as Contingency Force Pool (CFP) units which demanded the highest levels of readiness and would be the first units mobilized. Brig. Gen. (Ret.) Timmons ensured the readiness standards were met or exceeded within these units. As the Commander, 16th Engineer Brigade, he was the first General Officer to be mobilized in the Ohio Army National Guard since World War II. His command, 16th Engineer Brigade, was mobilized for Iraqi Freedom from September 2005 to November 2006. During this deployment he was in support of the 4th Infantry Division, commanded over 1,500 Soldiers (mostly active duty) and was responsible for over 7,150 square miles of terrain. His command was responsible for ensuring a safe and secure environment within the area of operation. The mission of the Brigade was to conduct route clearances and construction. Over 1,110 route clearance missions were conducted with 12,491 interrogations with 311 mines and 74,289 kilometers of road cleared. The route clearance mission saved untold lives of American Soldiers deployed in his area of operation. His Brigade also conducted various horizontal and vertical missions within his Area of Operation that included Troop Medical Clinics, Forward Operating Bases, Patrol Bases and road improvements. His Brigade was also responsible for the training of the 6th Iraqi Engineer Battalion that included a shadow program, equipment operator school, route clearance operations, and assisting with construction projects. Lastly, his command operated a Class IV yard (construction material) that was responsible for supporting any unit in his area with such items as sandbags, various types of wire, barriers, construction material (plywood, nails, aggregate).

The Ohio State University Class of 1965 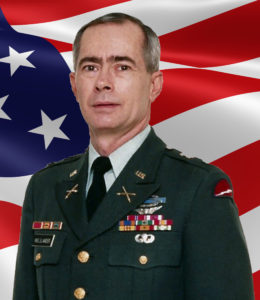 Born July 28th, 1943 in Newport, RI the son of a career Army officer who served in the Pacific during WWII, LTC Hulslander spent his childhood at various military installations on the east coast and in Yokahoma, Japan. After he moved to Columbus, Ohio in 1957, he graduated Columbus North High School in 1961 and entered The Ohio State University. He earned a BA degree in psychology in 1965. He was designated a Distinguished Military Graduate and commissioned a Second Lieutenant of Field Artillery in the regular Army. He later earned an MBA degree from Fairleigh Dickinson University in Rutherford, NJ.

After leaving active duty in 1980, LTC Hulslander was employed by Unisys Corp. where he worked for 26 years as a Project Manager and Program Control Manager.

He was married to Susan Bartz of Toledo in 1965. They have three children and five grandchildren. They are retired near Columbus where he serves as treasurer of his condominium association and President of The Ohio State University Army ROTC Alumni Society.

Save the dates for our annual Hall of Fame reception and senior breakfast. The evening of March 2 – Hall of Fame The morning of…