The Ohio State Army ROTC Alumni Society is pleased to announce its slate of inductees for the 2018 Hall of Fame Class.

The Ohio State University Class of 1955 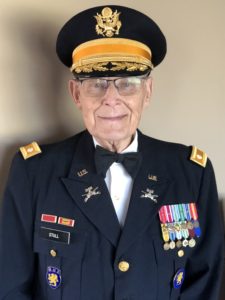 Lt. Col. Stull was born in Ashland, Kentucky in 1936.  For the next seven years his family lived in several locations in the Midwest.  At one point, while living in Indiana, he attended a one room school.  In 1943, they settled on a small farm near Marysville Ohio.  His high school class contain 8 students. The transition to The Ohio State University, with a population nearing 40,000, was quite a transition for Pete. Lt. Col. Stull earned his agriculture degree from Ohio State in 1955 and was commissioned as an Armor officer through ROTC.

After an initial tour in the 11th Cavalry, Lt. Col. Stull maintained his membership in the Army Reserve. He maintained his proficiency through various schools. In the late 1950s he requested active duty. He was assigned to a tank battalion in Germany where he became a Tank Company Commander. While in Germany he also attended the Air Force Air Controller School at Ramstein Air Base.

His second Vietnam tour began in 1970. He was assigned to the Plans and Force Structure Division of MACV (Military Assistance Command Vietnam). His major duties involved visiting and living with Vietnamese units to ascertain their operational readiness.

Upon return to the United States Lt. Col. Stull was assigned to the US Army Advisor Group for the Michigan Army National Guard.  And eventually became the Armor Branch Team Chief at the US Army Readiness Group, Selfridge at the Selfridge Air National Guard Base near Detroit. In this capacity he was responsible for providing advisory assistance to Armor units throughout Michigan and Indiana.

Eventually Lt. Col. Stull was convinced to accept a full-time position with the Michigan Army National guard where he served the remainder of his career until retirement. His highlight assignments included command of the 128th Armor Battalion and commander of the Fort Custer Training Center.  His performance as Mobilization Training Officer had a positive effect on the deployability of Michigan Army National Guard Soldiers.

Lt. Col. Stull is a member of the VFW, American Legion, and the DAV.  He has served as the City Manager for Caledonia, Michigan and Wayland, Michigan.  He will be recognized for his service in the coming months by Governor Snyder of Michigan.

The Ohio State University Class of 1969 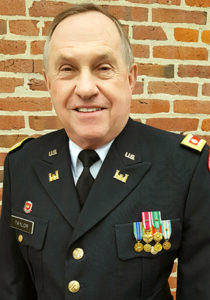 Lt. Col. Calvin L. Taylor, Ph.D., grew up in McConnelsville, OH, the son of a WWII enlisted veteran and a homemaker. He was the first family member to attend college. Taylor graduated in 1969 with a B.Sc. in Natural Resources from The Ohio State University, and was commissioned as an Army Engineer Officer through ROTC. While serving three years on active duty during the Vietnam era as an Environmental Engineer, he earned a Master’s in Public Administration. After active duty, he earned his Ph.D. from The Ohio State University in an interdisciplinary engineering sciences program. While at OSU, he interned as an Academic Advisor in the School of Natural Resources and as Assistant to the Director of the OSU Ohio Water Resource Center.

Lt. Col. Taylor’s 27-year military career included company command and staff positions. Taylor served as Adjutant for the Ohio Army National Guard’s 16th Engineer Brigade. He then became the full-time, statewide Director of Public Relations for the Ohio National Guard which expanded to include responsibilities for the internal Ohio Disaster Services Agency (later renamed the Ohio Emergency Management Agency). In the 2078th US Army Reserve Forces School, he advanced from Command and General Staff College faculty, to Adjutant, to Assistant Commandant, and then Acting Commandant as the School was deactivated in 1997.

Dr. Taylor served 25 years in public service management positions including 12 in the Ohio Emergency Management Agency as Chief of Operations and Training and Chief of Preparedness, Training, and Exercises. His disaster experiences included tornadoes, floods, snowstorms, prison riot, drought, audit, deployments, and tuition crisis. He is recognized in Who’s Who in the Midwest, America, and the World. Taylor served as President of the Contingency Planners of Ohio, as a Trustee on Columbus Board of Rebuilding Together, as a Trustee of the Ohio Academy of Science, and Chair of the Worthington Planning and Architectural Board. From 2008—2012 he saved the Civil War-era Veterans Memorial Hall in Worthington from demise and decay. While 5-year volunteer President and General Contractor, he provided planning, budgeting, personal construction skills, and hundreds of hours on this massive project; he wrote the only Veterans Memorial local zoning code in Ohio, which was applied to the Hall by the City.

Taylor was elected in 2016 to serve on the Board of Governors of the OSU Army ROTC Alumni Society where he had served as a founder and President in 1988-90. Lt. Col. Taylor, as a Life member of the Military Officers Association of America, served as 2016-2017 Vice President and Director of Membership of the MOAA Central Ohio Chapter where he reversed a decline in membership by attracting 72 new members—the highest number of new members in two decades.

The Ohio State University Class of 1995 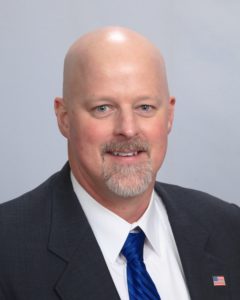 Captain Jeffrey L. Van Linge is a native of Lancaster, Ohio and entered service in the U.S. Army in 1987 after graduating from Lancaster High School. His career covered a total of 13 years on active duty and in the Army National Guard, beginning as an E-1 in the mechanized infantry (11M). His first assignment was with the 8th Infantry Division (Mech) “Pathfinders” in Baumholder, Germany as a Bradley IFV crew member, driver, and fire team leader. Following assignment was with the 5th Infantry Division (Mech) “Red Devils” at Ft. Polk, as a M113 IFV gunner and track commander and combat tour in the Republic of Panama, Task Force Bayonet, Operation Just Cause. Sergeant Van Linge was on the advance party for redesignation of the 5th Infantry Division to the 2nd Armored Division at Ft. Hood. Transitioning out of active duty, he took a new MOS as a 14S Stinger missile fire unit crew member to be part of a newly redesignated Air Defense Artillery Battalion in the Ohio Army National Guard, the 2nd/174 (HAWK). He began classes at The Ohio State University in 1991, joining Army ROTC in the fall of 1992. That brought a new assignment as a Platoon Leader for the 997th Ordnance Company, Ohio Army National Guard. He earned a BS in Agriculture in 1995 and was commissioned Second Lieutenant, Ordnance Corps. Subsequent assignments were with the Virginia Army National Guard’s 429th Brigade Support Battalion, 116th Infantry Brigade Combat Team where he served as Platoon Leader, Motor Officer, XO, and Company Commander. Capt. Van Linge earned his MBA from James Madison University.

He was active on the Army ROTC Alumni Society’s Board of Governors from 2000-2014 helping coordinate many events and activities serving as a board member, Vice President, and President. He was awarded Outstanding Society Leader in 2011 by the OSU Alumni Association. He was also a founding member of Epsilon Tau Sigma fraternity at Ohio State serving as the Beta Chapter’s first Vice President. Capt. Van Linge is a life member of the OSU Alumni Association.

Since 2000 Capt. Van Linge has been an executive for Fortune 500’s Peoria, IL based Caterpillar and Columbus, IN based Cummins, Inc.